Simone Lody: It would be nice to get a medal! 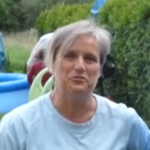 Slowpitch is great for meeting people. In the middle of June I met Simone. She played for my team, he had fun, played nice games and spoked about slowpitch. Simone is nice and interesting lady and the killer in the hitters box.

Hello Simone, be so kind and introduce yourself. Thank you.
I was playing fastpitch softball from 1994 – 2009 with the Berlin Kangaroos in a women team and with the Hangaounds in a mixed team. I play slowpitch since 2008. I am the headcoach of the German National team coed slowpitch since 2011. My assistance coaches are Bruce Fredrick and Dave Smith (hitting coach).

What is the position of slowpitch in the DBV?
In 2011 we started a program to develop slowpitch softball in Germany called: „The way to Europe“.

It’s not so easy to find the right way, because the most slowpitch teams are not members in the DBV. They are playing not with the official ESF rules and in most of times they only play with two female players.
Men playing Baseball – women playing fastpitch softball…. That was the fact in Germany till 2011.
Now we have some coed teams and have an official German Championship in September with eight teams.
We like to go to the ISF World Cup in January in Florida, USA. So we hope we will receive more credit.

How is provided selection to national team?
The players from the national team comes from all over Germany.
We are making tryouts in July, October and April.
In July 2012 we have had a tournament in Berlin; in October 2012 we made a tryout in Werl with 60 players and in April 2013 we make in a last practice and mini tournament the decision for the national team in Geilenkirchen out of 45 players.
Every player wants to be under the last 18. But the decision for us is hard and only a few people have enough love and passion for the game to be a substitute player.

Do you use scouting?
Yes! We try to scout every game.

Does it work?
Yes! 🙂 I think we have good experiences with it.

…and against GB?
If you know the players and their favourite liked pitches – it could help against the GB too.

What is your team schedule for European championship?
We arrive on Sunday, the 14th of July an have a warmup game agains Waynes World in Pardubice.
On monday and tuesday morning we have reserved the official field, to get a feeling for the stadium.
In the afternoons we play a little bit kickball and have mental preparation.
From Wendnesday till Friday we will have three till four games a day, so our idea is to have a nice and easy time before the European Championship starts.

What is your goal for European championship?
It would be nice to get a medal!

Thank you for interview and good luck.
wayne